Everyone who frequently goes to bars or restaurants with a bunch of friends has already been through a hard time when the bill comes. Especially if the table is big, full of people, everybody sharing and ordering different meals and drinks.

I’ve been through this problem several times and had to pay way more than I had consumed. Therefore, I thought that it would be interesting to solve this issue through an app that could make the bill split easier, faster and fairer.

There are many different apps for splitting the bill. Many of them have interesting features, however most don't solve all the aspects that can happen in the situation.

The first stage of the process I conducted interviews in order to understand the common problems that the users experience when they’re at a bar/restaurant, and then gain insights on the topic.

This required asking broad questions and encourage the users to open up about frustrations they experience in the moment of dividing the bar/restaurant’s bill with friends.

The session helped me to narrow down some issues users have in common and also a persona.

After the research, I gathered the amount of answers, and according to the topic, I was able to organize them into the affinity groups below:

Then I draw connections between these individual elements to  develop new and deeper insights. They helped me to define the problem(s) and develop potential ideas for solutions. Below you'll be able to see some of the main quotes that are related to each topic:

Then I drew connections between these individual elements to develop new and deeper insights. They helped me to define the problem(s) and develop potential ideas for solutions. Below you’ll be able to see some of the main quotes that are related to each topic:

“It’s annoying to check every item each one consumed and then divide.”

“If people consumed much more than me, I think it’s unfair to split equally.”

“The only way that people could pay the fair price is where you can have individual control.”

“I usually don’t have any idea of my expenses before the bill total. Especially if it is a bar.”

“I’ve already had to pay a lot more many times. Just because I arrived at the bar later than the others.”

“It’s irritating when the bar charges for more items then people have ordered.”

Apps to split the bill

“I always forget to use it.”

According to the outcomes, I could create a fun story that I could notice that people usually get through in bar and restaurant situations. 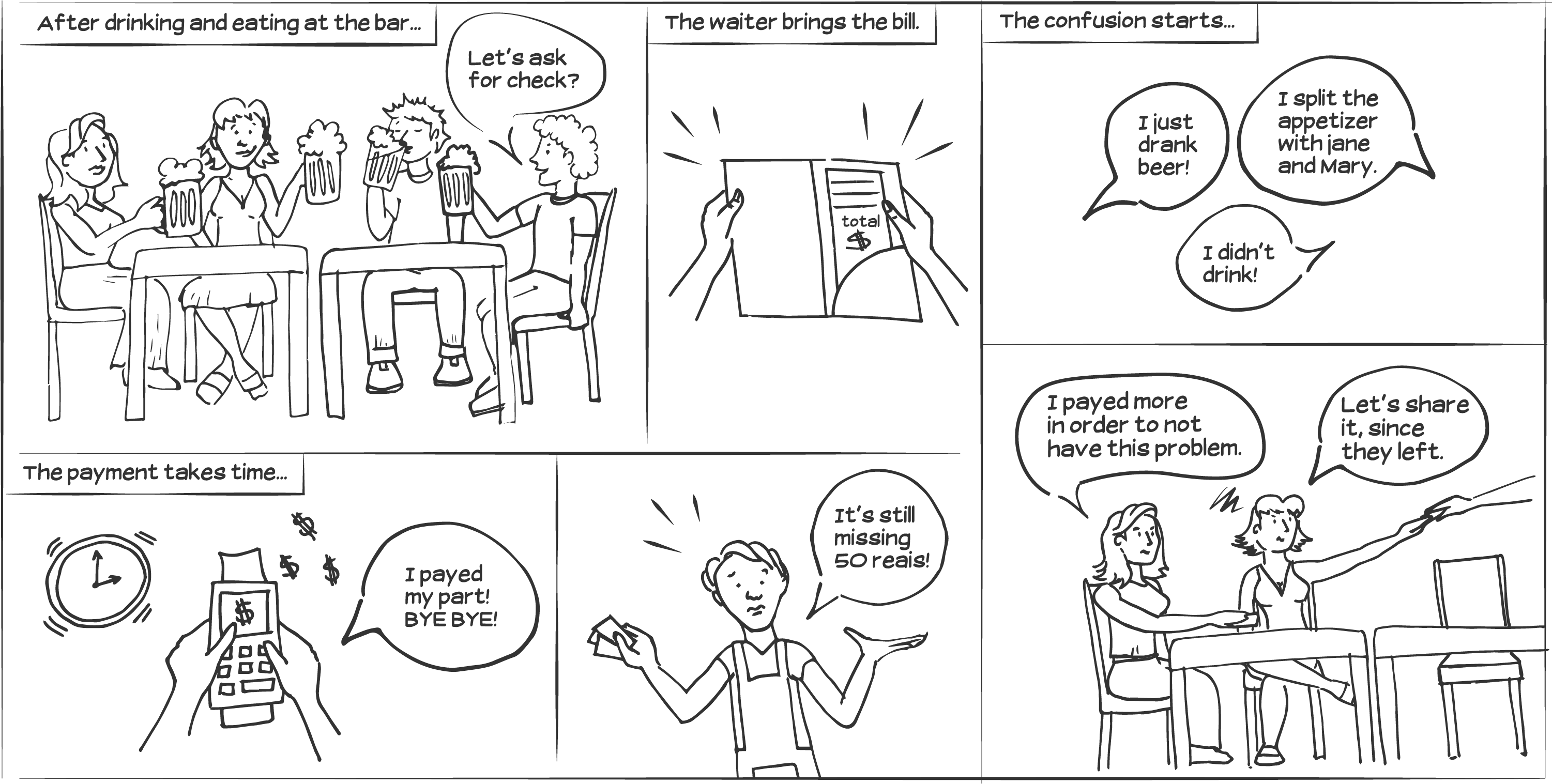 “I hate when I consumed less than the others in the bar and someone decides to split the bill equally.”

Every weekend Rafael goes to bars with his friends.

The best moment of his job is happy hour.

Rafael has a lot of friends, so his table is always full of people.

He wants to save money to travel, although he ends up spending a lot whenever he is at the bar with his friends.

He would like to have more control of what he spends on weekends.

Everytime he is at a bar, he tries to have a separated bill for him, however it’s not always possible.

He wishes that paying the bill was more easy and quick.

He hates when he has to pay more than he consumed.

Since he doesn’t have a good salary, he thinks that is unfair to split the bill equally in restaurants with his coworkers who earn higher salaries.

It’s frequent that Rafael share a table with many people, so he already knows that splitting the bill will be annoying.

Whenever he drinks a lot, he looses control of what he has consumed.

The app has two options for the customer to choose when they what to split the bill. In the next slides, it’s possible to check the difference between them. 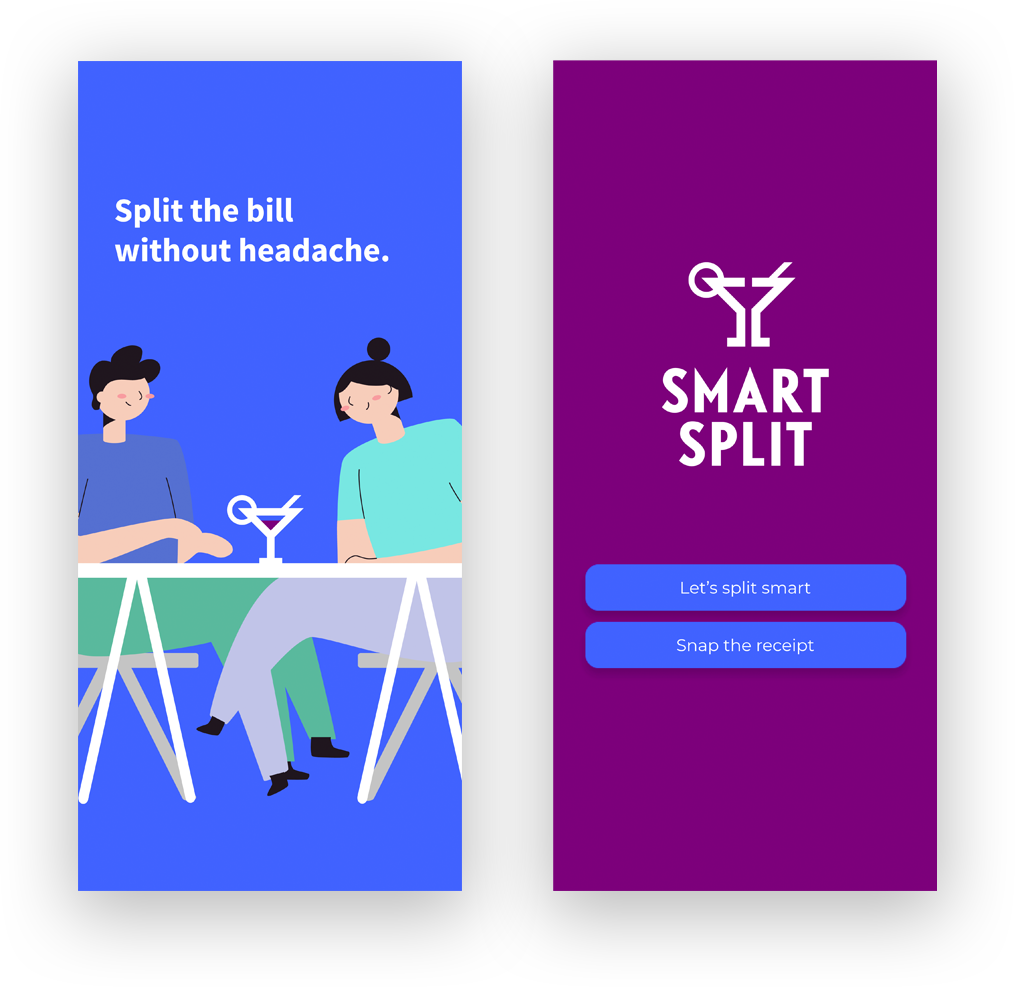 The main idea of “Let's split smart” is to simplify the bill payment, not only for the client but also for the waiter.

2. When you press the name of the restaurant/bar, you will ask the waiter for the table’s number. Everyone in the same table will type the number to enter into the same bill. 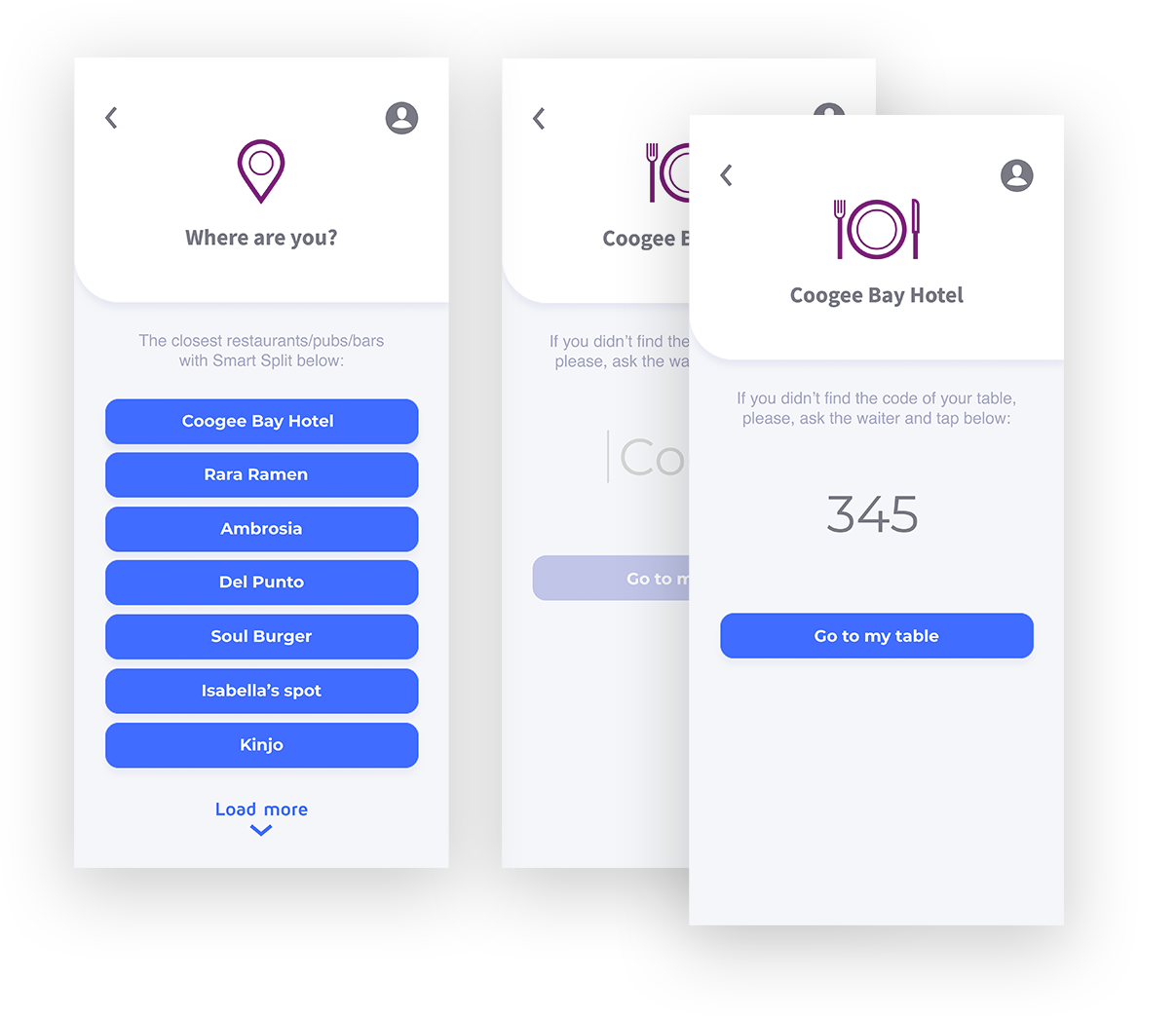 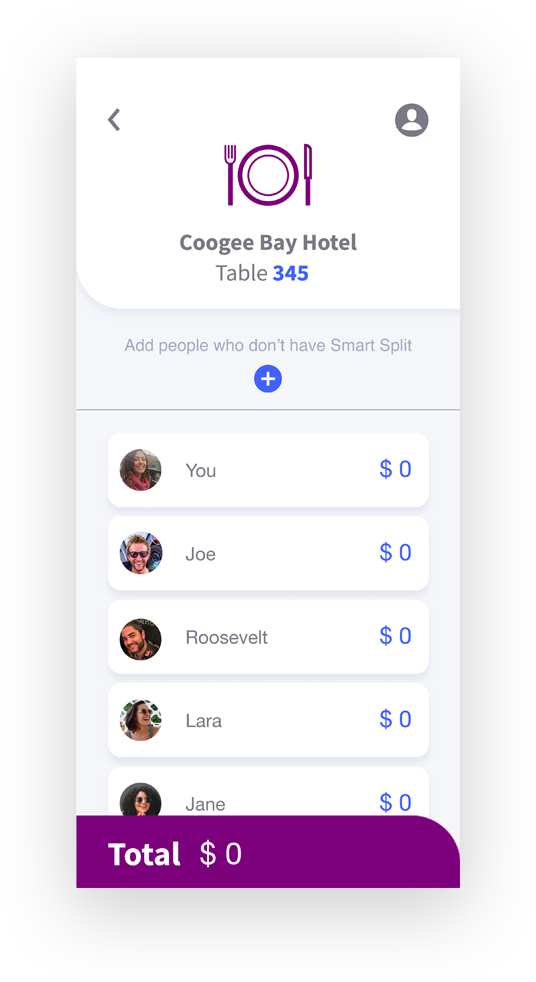 All friends at the table start to appear on the list.

In case there are people in the table who, for some reason, can’t download the app, other people can add them to the group.

1. Someone will add the person’s name and phone number to the list. This friend will receive on her/his phone screen the orders such as SMS messages. 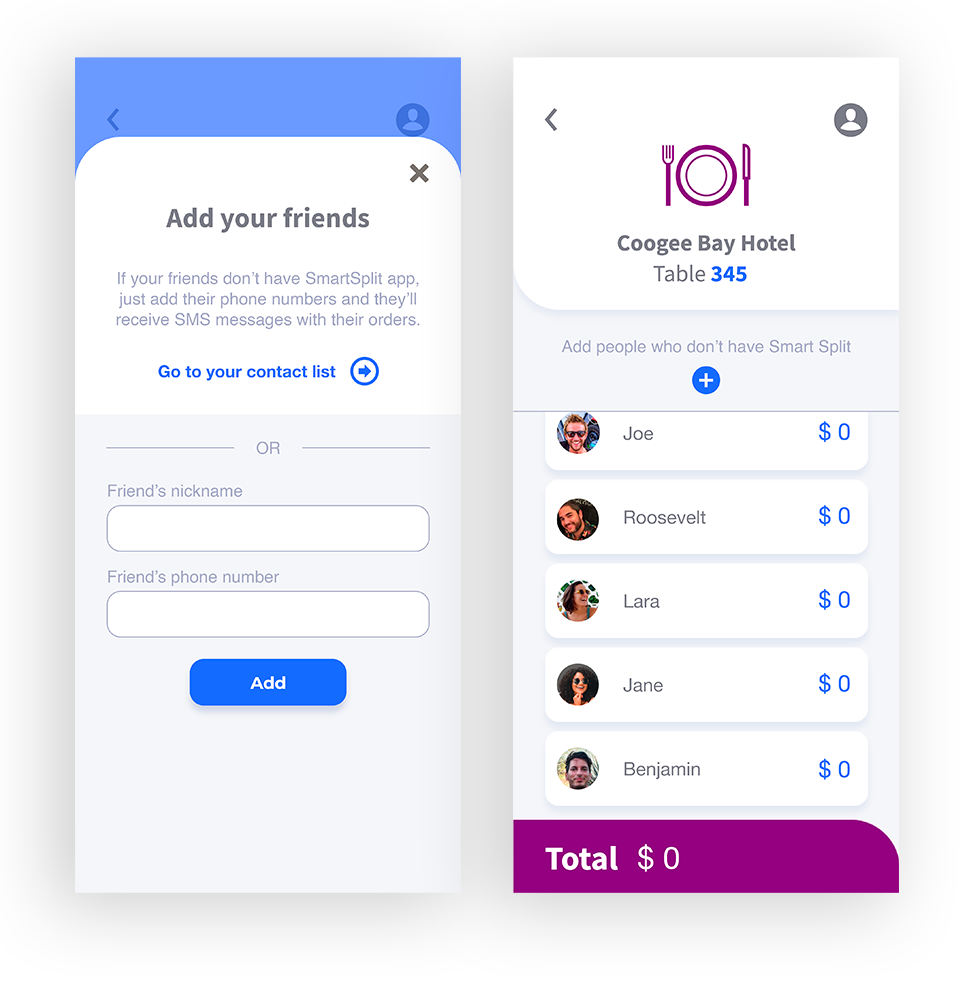 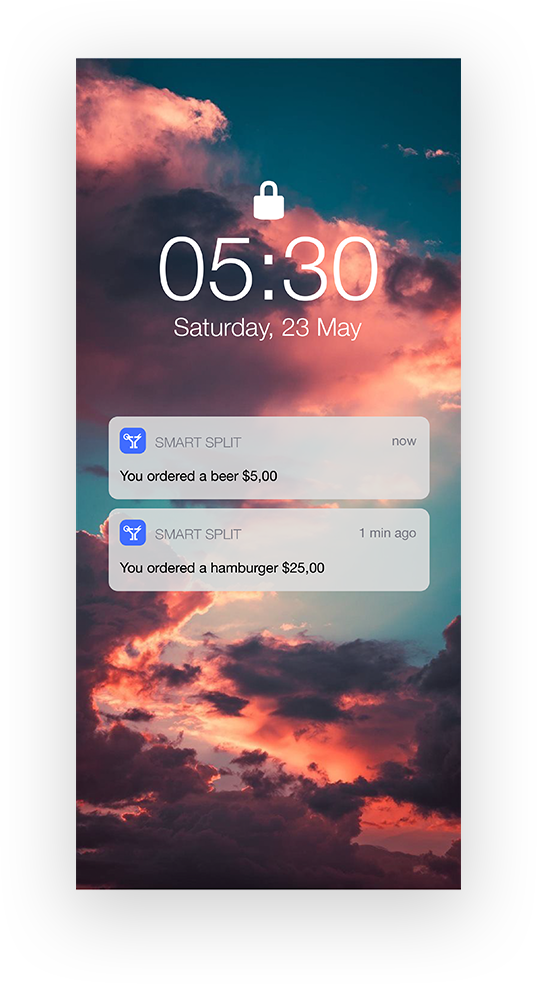 As soon as everybody appears on the list, people are ready to drink and eat. The waiter will also have the same list with the names on his tablet. Therefore he/she will add each order linked to each person. While he adds, the person will see the item and the price on the phone screen. Thus nobody will be surprised when the bill comes.

You can pay whenever you want and efficiently by phone. You have to choose the way you’re going to pay. If you pick credit or debt, it’s the same way as if you were paying online. You won’t even need the waiter, and you’ll receive the receipt on your phone. 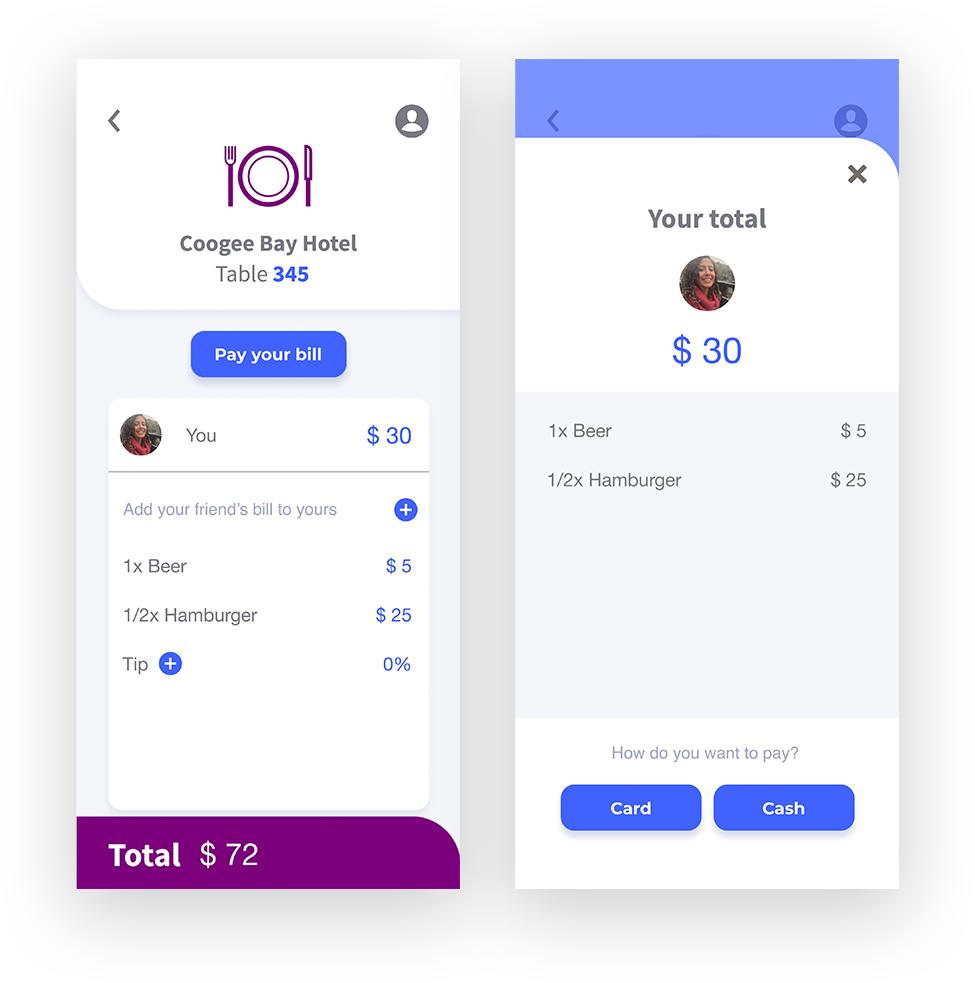 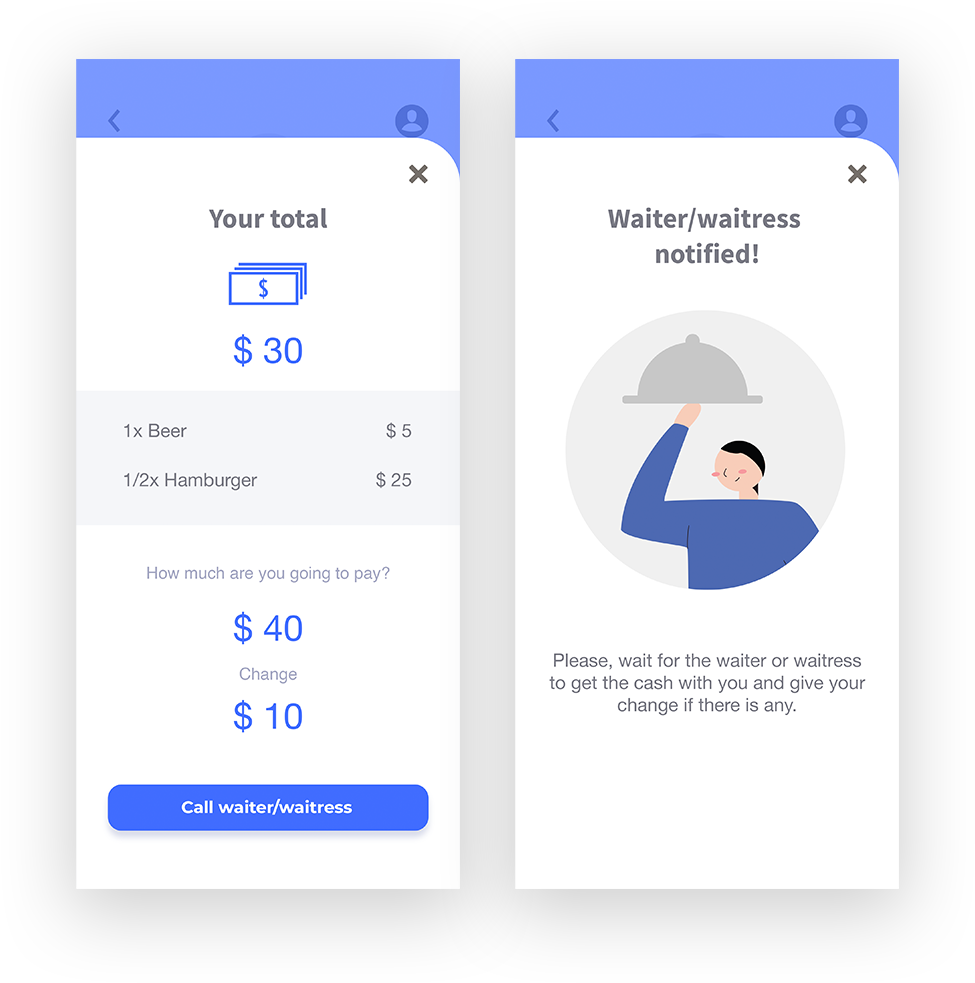 However, if you choose the cash payment, when you press the button, the waiter will be notified on his/her tablet screen. You only need the waiter to bring the change to you. Easy peasy!

If the restaurant or bar is not registered in Smart Split?

No problems! Snap the receipt.

If the restaurant or bar is not registered in Smart Split, the user can snap the receipt. The app will recognize the items and prices. 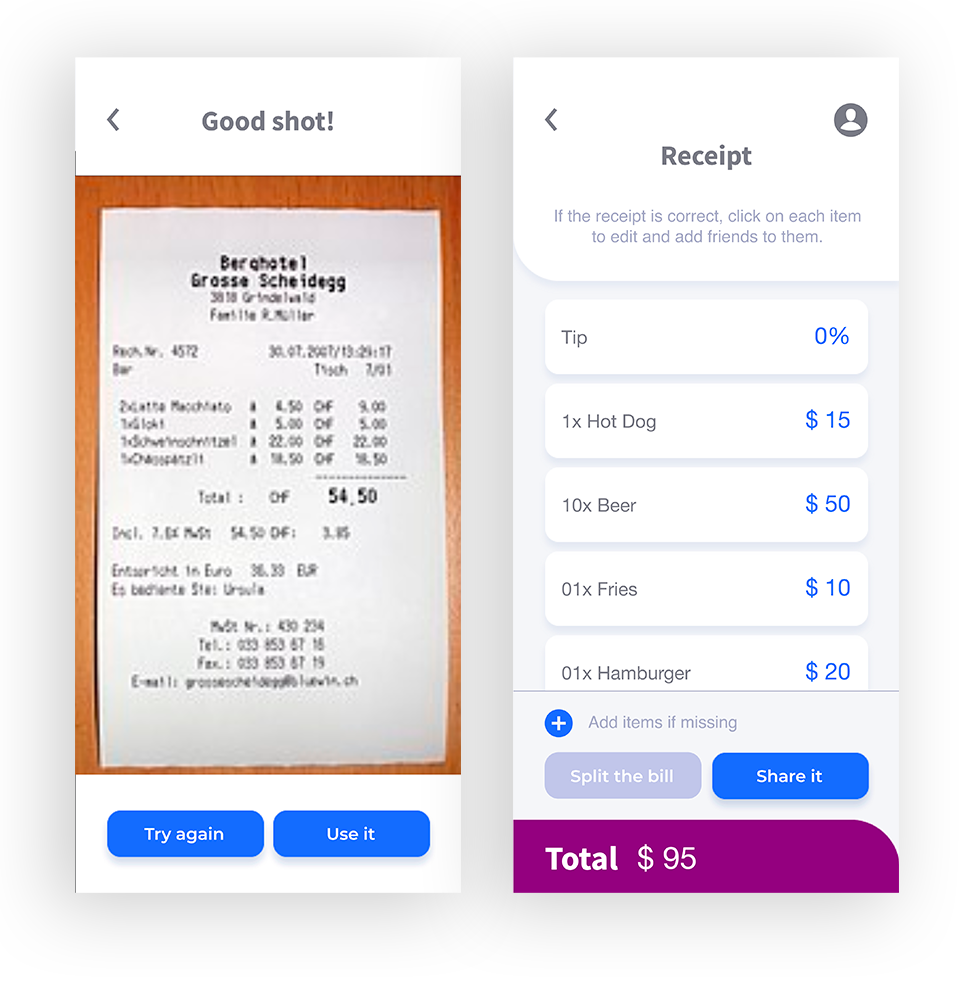 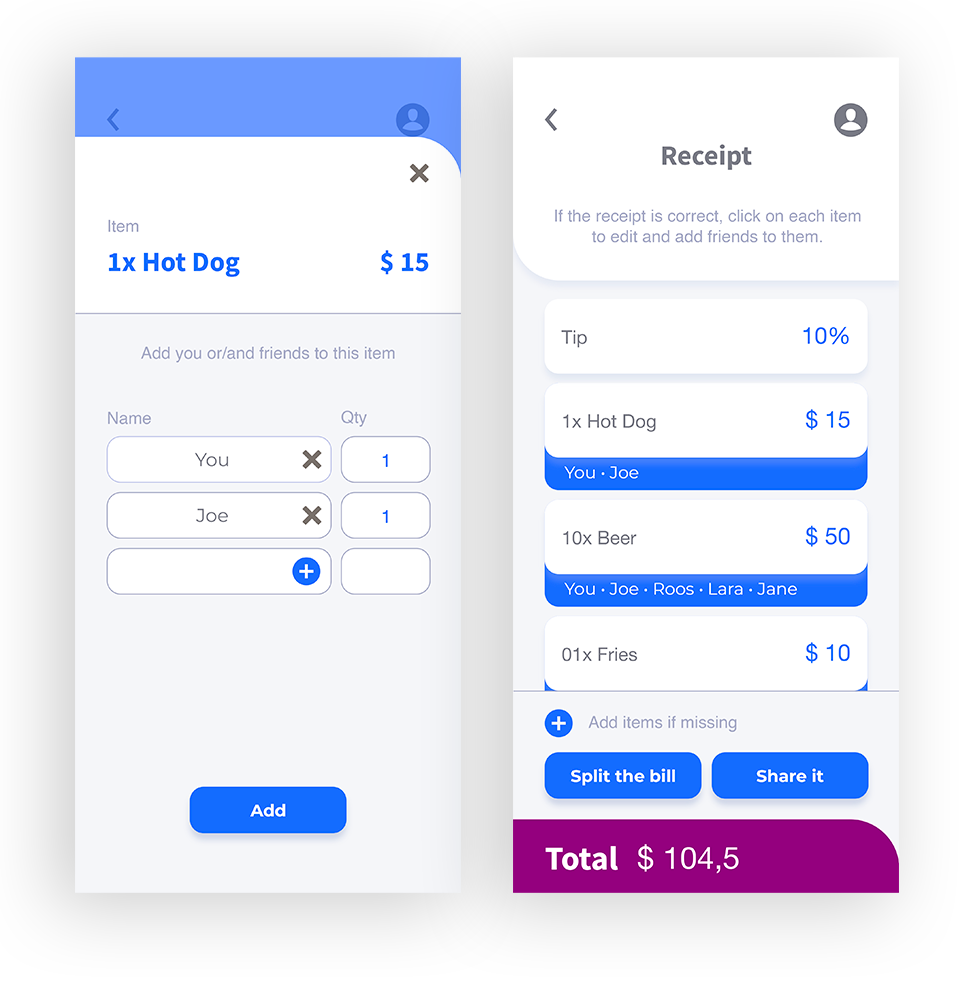 Add you and your friends to each item

If the restaurant or bar is not registered in Smart Split, the user can snap the receipt. The app will recognize the items and prices.

The app will make the math, and each one will know exactly how much they have to pay. 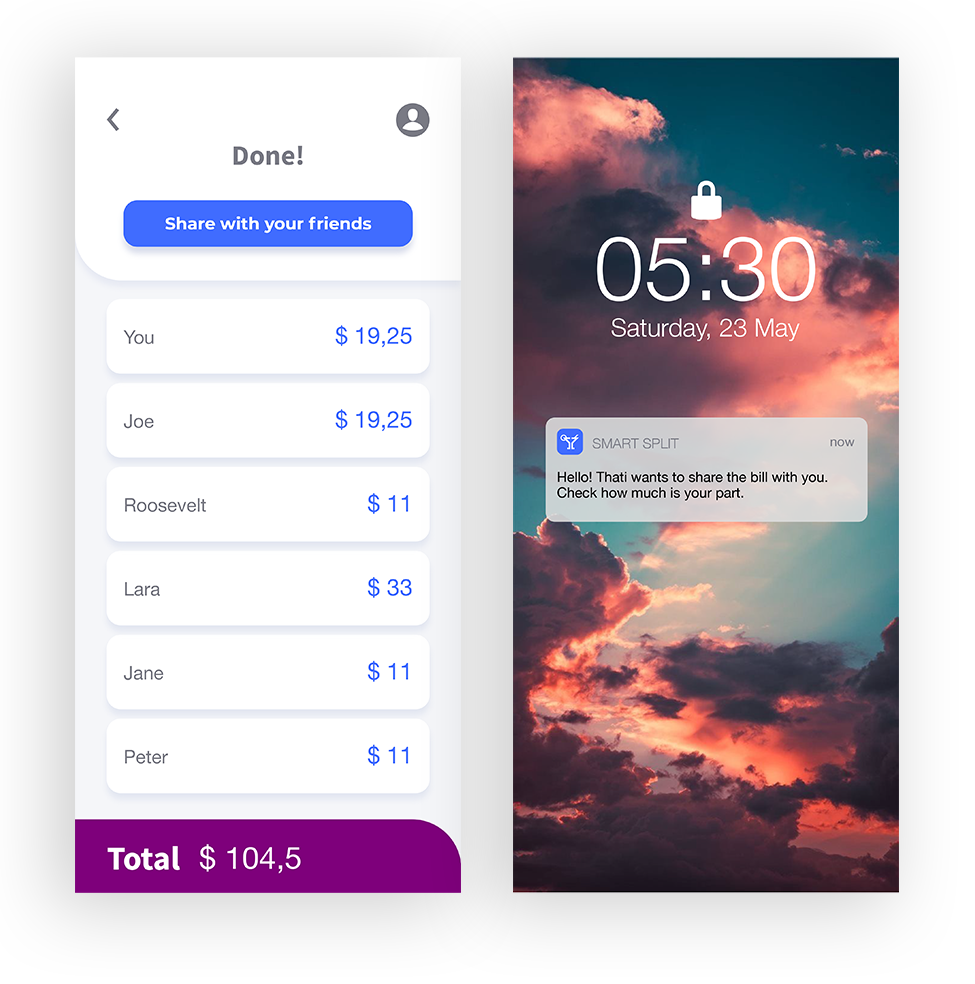